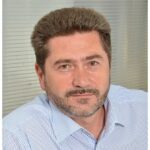 In the occupied Crimea, promoting militarism among the youth of the Crimea is a consistent, large-scale, purposeful process, aimed at suppressing individuality and raising obedient and motivated soldiers for the Russian armed forces. The militarisation starts in the kindergartens or even at birth.

The most vivid example of propaganda is issuing a draft card at the maternity hospital to a boy who has just been born together with his birth certificate. A case like this was observed in the course of a monitoring project supported by the OSCE on the protection of human rights on the occupied territory of the Autonomous Republic of Crimea.

One of the consequences of the occupation of the Crimean Peninsula and forcing all the people who were the permanent residents of the Crimea when the occupation occurred to adopt Russian citizenship is the illegal conscription of all adult men to the Russian armed forces.

There are hard-and-fast administrative rules regulating the behaviour of a person to be conscripted. All males over 14 years of age must undergo conscription training, obtain draft cards, and register themselves at the military commissariat. Their movement across the territory of the Russian Federation is also regulated. All conscripts who want to leave their place of residence for longer than three months during the conscription period must notify the military commissariat or the local administration of the relevant area about this in person.

International law, especially the IV Geneva Convention Relative to the Protection of Civilian Persons in Time of War, one of the signatories of which was Russia on behalf of Ukraine, requires that an occupying party refrain from forcing the population of the occupied territory to serve in its armed forces.

However, in Russian legislation, draft evasion is punishable under criminal procedure with the imposition of a fine or up to two years of imprisonment. A new draft act considered by the State Duma also provides for a 5-year ban on leaving the country for all people evading the draft. The number of criminal matters involving the so-called draft dodgers is increasing year by year.

According to data provided by human rights advocates, at least 135 criminal cases have been initiated in the Crimea for evading military service in the Russian armed forces, and the majority of the judgements concerning the residents of the Crimea have involved fines in amounts ranging from 5,000 to 80,000 roubles (up to 900 Euros). The payment of a fine does not release a person from the obligation to undergo military service in the Russian armed forces.

At first glance, the number of Crimean residents who have undergone criminal prosecution may seem insignificant. It can mostly be attributed to the traditions and mindset of the locals—those Ukrainian citizens who were forced to adopt Russian citizenship in 2014 are required to serve in the armed forces, just like it used to be in Ukraine, which is why many inhabitants of the Crimea consider this particular commitment a given and an expression of abiding by the law. This thesis was confirmed in several surveys held by human rights advocates in the framework of the monitoring project supported by the OSCE.

In Russia and the Crimea, the names of the people that have refused to undergo military service are published. The main purpose is to exert psychological pressure and generate social stigma. Why does this occur?

The Russian propaganda machine is a refurbished copy of the totalitarian original that has been refined by the wars and repressions of the Soviet past. It includes a set of propagandistic activities aimed at suppressing residents’ personal identity and offering themselves up as a sacrifice for the sake of the provisional well-being of the Russian society.

There is no doubt that the cult of war poses a threat to the mental well-being of pupils. The militarisation of education is the cornerstone of the entire process of military conscription. It starts at kindergartens and continues at schools.

There is a multi-level (federal, regional, municipal) system of training young people for the draft. For example, nowadays the All-Russia Young Army National Military Patriotic Social Movement Association (Yunarmiya), which was founded in 2016, is a tool for imitating the military way of life among youngsters en masse and inculcating the cult of war. Joining the ranks of this organisation is eagerly encouraged by school administrations, including in the Crimea.

As a rule, school-aged children are not capable of critical thinking or adequately assessing the things that are going on around them, which is why they fall prey to the massive pressure exerted by military propaganda.

While Russia glorifies and mythologises the occupation, we can also clearly see how the ideas of racial intolerance are disseminated among school children in placing the emphasis on saving the Slavic population from the indigenous inhabitants of the Crimea in talking about this topic.

Can Ukraine as a European country whose territory was forcefully occupied in the 21st century remain a passive observer to the things that are happening within its territory? Obviously not.

In addition to international tools, we should actively prepare our own legislative basis to counter such processes. One of the tools could be the Act on Collaboration, which should include a list of specific actions involving cooperation with the occupation government that are to be punished pursuant to criminal or administrative procedure, including, in particular, promoting military propaganda in schools. There are specific people and executors behind specific deeds and actions.

In the context of hybrid war, information operations are quite often as devastating as combined military operations. Since the mid-2000s, Russia started paying considerable attention to different kinds of information in modern warfare. Minister of Defence of the Russian Federation Sergei Shoigu stated: “So far, the information troops we have created are much more effective and strong than the former counter-propaganda units […]” in February 2017 upon presenting a report at the State Duma. The Doctrine of Information Security of the Russian Federation is also very comprehensive and context-specific, which goes to show the immense attention paid to information operations.

The majority of Russian communications generated today are focussed on excusing its offences, both within the country and on the international stage, since the occupation of the Crimean Peninsula that once belonged to Ukraine breaches dozens of Russia’s international obligations and more than 200 international bilateral agreements between Russia and Ukraine, in which the Crimea is claimed as Ukrainian territory. Information campaigns aimed at the population of the provisional “border-zone” on the administrative boundary with the Crimea are a separate matter.

Within the past seven years, the material and technical infrastructure has been consistently developed and upgraded, while the means of getting the propaganda across to the inhabitants of the occupied and border territories have been amended and perfected.

The capacity of the existing reception and transmission facilities has been increased, and new, much more powerful facilities have been built in the immediate vicinity of Kherson Oblast in Ukraine. In addition to that, parallel broadcasts are transmitted from the occupied territory at the frequencies of the Ukrainian radio stations broadcasting from the Ukrainian mainland, and vacant frequencies are jammed. New mass media outlets meant for propaganda purposes are opened in Ukraine.

The situation is exacerbated by the fact that in 2018 Ukraine stopped transmitting analogue television signals, while digital broadcasting was not capable of fully covering the territory that had been covered before. At present, it can be said that the broadcasts of Russian TV and radio channels are available in any populated locality that is within a 50 km radius of the provisional border, while at the same time, signal reception is not stable for the Ukrainian TV and radio broadcasters in approximately the same broadcasting range. Weather conditions often allow listening to Russian radio stations even in Kherson, which is 300 km away from the nearest reception/transmission facility in the occupied Crimea.

This whole situation has a dramatic effect on the people living in those areas as well as on the results of local elections, which took place in the autumn of 2020. The confident victory of the pro-Russian parties in these areas may be partially attributed to this particular factor. Considering the decentralization reform which attributes increasingly more powers local authorities, the impact of information factors poses a direct threat to the national security of Ukraine.

Watch a discussion on the same topic: “National Resilience: How Does the Occupation of Crimea Affect Ukraine?” on March 10, 2021