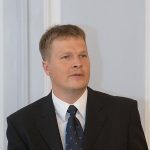 We are in a strong geopolitical position

Borders and the meanings attributed to them go with the times. The language used to articulate these changes is its own kind of medium. The Estonian language allows us to derive several verbs from the word piir, or border: to be contiguous with (piirnema); to be limited to (piirduma); to restrict or lay siege to (piirama); to define or delimit (piiritlema). Nouns can also be derived, such as restriction (piirang) and piiritus, meaning both ethanol and boundlessness, without borders. If we place these in a specific context, we can deduce conceptual connections and patterns. For example, we may claim that the primary task of states is to protect a limited (piiratud) territory, i.e. resources, jobs, industries and ideology, as well as to monitor. Or one can argue that every marking of physical and social space delimits it from conceivable internal and external threats. Who has the right to enter a state, and under what conditions s/he may live and work there, own real estate and participate in politics is a question of restrictions (piirangud). It is a good thing when contiguous (piirnevad) countries limit themselves to (piirduvad) their territory and do not crave that of their neighbour. By contrast, boundlessness or strong spirit (piiritus) merges polarities and blurs identities. And so on and so forth, to infinity.

In today’s terms a border should not be understood only as a static dividing line or point of contact, but in terms of a much broader sociocultural meaning, which exists on our own imaginary maps and in our consciousness. Even if borders remain arbitrary divisions between units of territory, they may have deeply symbolic, political, historical and cultural meanings for human groups. Borders help create identity and are in turn constructed with its help. The need for boundaries can be justified by national security, insecurity and difficulties in self-determination. The greater the impediments borders pose to interaction between peoples and countries, the more we can discern the vulnerabilities hiding behind them. Think of why some houses are surrounded by impenetrable walls two metres high, while others have low, green hedges. In the same vein, what message does the following sign send to well-meaning passers-by? “Trespassers will be beaten, and if they survive, they will be shot.”

On 19 December 1917 an article appeared in Sweden’s liberal newspaper Afton-Tidningen entitled “En ny Östersjöstat?” (A New Baltic State?). It was accompanied by a map on which the post-February Revolution governorate of Estonia had been enlarged to encompass Valga, some territory beyond it, and the Pskov region. The idea of the Estonian state was first given visual shape by the foreign press, just a few months before the Declaration of Independence. At that time there was less clarity than one might think about the future of Estonian statehood. There was no doubt about the existence of the Estonian nation, but most people were not able to see beyond autonomy within the Russian state. The Manifesto to all the Peoples of Estonia was born as a reaction to the prevailing chaos of war. The independent Estonian Republic was delimited in writing based on Estonia’s historical and ethnic boundaries. Narva was included in the newly minted state but, unfortunately, the vicinity of Valga and Pechory were excluded. This choice can be justified by the circumstances of war, which made it impossible to conduct a referendum in the border areas on inclusion in the state. But should we presume that there were no question marks about the geographical extent of the then still conceptual “Estonia”?

The War for Independence helped in many ways to clarify these general understandings. A defence force was created on the basis of Estonian military units that had defended the Russian Empire, and it withstood both the Bolsheviks and the Baltic German barons. Success on the southern front gave Estonia a stronger position in Estonian-Latvian mixed settlements. Estonia claimed most of the city of Valga together with its railway junction, never mind that the former Valga County remained in the southern Latvian-speaking area and, after this demarcation was made, the county no longer had a significant centre. Estonia achieved a significant strategic advantage on the eastern front, as a result of which a part of Ingria east of Narva, and Pechory in the south-east were added to the new republic. Ethnic aspects were important, but the determining factor remained 12 verst [a Russian measure of length roughly equal to 1,067 metres—Ed.] of the Narva River and about the same amount of the eastern Seto settlement areas charted by Jakob Hurt. Two-thirds of the city of Valga and two-thirds of the population of Narva made these cities part of Estonia, while the claim is more difficult to make for the transitional zone between Vastseliina and Izborsk.

On the sociocultural level the understanding of Germans as ancient oppressors of the peasantry was cast in stone, but a parallel distrust of the eastern neighbour’s intentions grew apace. Even at that time, cautious efforts were beginning towards laying bricks for a wall of separation, but not so as to culminate in the Finns’ ryssävihä and the Mannerheim Line. In Estonia’s case, these new demarcation lines were torn down by the June 1940 coup and the deportations that followed. Nevertheless, the foregoing discussion explains why the Tartu Peace Treaty, signed on 2 February 1920, is symbolically the birth certificate of the Estonian Republic, and to deny this is tantamount to self-negation.

Questions about Estonian geopolitical belonging became relevant again in connection with re-independence. Soviet-era repression and the pressures of Russification seemed to indicate convincingly that “nothing good can be expected from the east”. This clash of civilisations was displayed in full view at the Narva River: the Western European Roman Catholic/Protestant cultural tradition standing across from the Slavic, Orthodox world, as testified by medieval fortresses facing each other on opposite banks. Apparently this delimitation was most convincing to those who were prepared to declare the Estonian SSR’s administrative border as the border line of the Estonian Republic. Those inclined to be dreamers staunchly demanded shifting the border further to the east, to the boundary agreed upon in the Tartu Peace Treaty. However, sceptics thought it would be complicated to consider 80% of the Russian-speaking eastern part of Virumaa as western. Despite various nuances in the process of specifying borders, it was obvious that Estonia would return to Europe and distance itself decisively from the east.

The Estonian political elite chose the path of restitution when pursuing the restoration of independence and founding the Estonian state; to a large extent this meant reviving and modifying the constitution of 1938, including territorial claims to a 2,000-km2 piece of Russia that, before World War II—and according to the Tartu Peace Treaty—had belonged to Estonia. In 1945 the areas had been merged administratively with the Leningrad and Pskov oblast. Estonia’s 1992 constitution allowed only those who were legal citizens of the interwar Estonian Republic to make constitutional decisions; thus, half a million post-war Russian-speaking immigrants became extra-territorials. Terms such as (muulane) (alien, stranger, foreigner) widely used during the Singing Revolution stuck for at least the next decade, if not longer.

Estonia succeeded in proving to the world that independence had effectively been restored following 50 years of occupation. However, attempts to restore the old nation-state as it was by legal means amounted to a fiction. Estonian territory may have been enlarged by the lost territories, but the country’s population decreased due to illegal immigration. Constructed reality (a term Lauri Vahtre “loves”) was reflected in early history and geography textbooks, school atlases and maps, foreign-policy rhetoric and even the weather service. Back then, Russia was explicitly defined as a threat to Estonian statehood for the first and last time in the republic’s fundamental security-policy document. However, at the time there were some politicians who wished to draw up a treaty with Russia regarding connected domains, in order to participate in the joint administration of those territories that legally belonged to Estonia but were not currently under its jurisdiction. Even in 1992 the radically minded repeatedly crossed the border with the goal of moving the border-markers to their legally mandated position, not to mention the daily picketing that took place on Toompea and in front of the Russian Embassy to demand the return of the lost territories.

In today’s Estonia, there is far less need to involve Russia in justifying the separate existence of Estonia as both a state and a nation. Being Estonian is far more than not being Russian. The strength of this identity is demonstrated by the ability to remain calm even when external irritants get dangerously close to the red line (repeated Russian violations of airspace, military manoeuvres close to the border and fake news from Sputnik). Most of us are not bothered by the clip about deportation by the popular sketch show “Tujurikkuja” (Wet Blanket). We can impart the spice of black humour to tragic events while seriously commemorating the victims of communism. Estonian identity has expanded to the point of boundlessness and inebriation, uniting people through their language skills. Despite what EKRE [Conservative People’s Party of Estonia] says, blood can be mixed, and it does not become diluted as a result. We have seen politicians whose mother tongue is Russian working towards the Estonian cause, and we no longer label them as aliens. They belong with us. This is particularly true in situations where Estonians fear pressure from immigration and are ready to close the borders.

We are in a strong geopolitical position, and have distanced ourselves from the insecurity of “in-betweenness”. The eastern border is in place and it has been marked out on the landscape. Indeed, it is so intricately drawn that the Eston Kohver incident can never be repeated. Nevertheless, no one can prohibit dreaming about legal boundaries. However, it would be ill-advised to base political planning on such dreams. As Speaker of the Estonian Parliament (Riigikogu), Henn Põlluaas should know that Estonia’s land border is determined by the Tartu Peace Treaty and by other international border agreements (§ 122 of the Estonian Constitution). No one would want to give up the birth certificate of the Estonian state, but this should not interfere in our relations with our eastern neighbour.