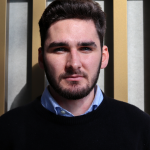 For just under a decade, the Baltic states have actively participated in Operation Saber Strike, an annual series of multinational tactical exercises led by U.S. Army Europe (USAREUR) to enhance cooperation within the alliance and illustrate the combined capabilities on the Eastern flank.

The latest exercise, Saber Strike 2018, featured 18,000 troops training in Poland, Estonia, Latvia, and Lithuania making it the largest Saber Strike to date. Although regular NATO military exercises in Europe have continued (a total of 102 are scheduled for this year), 2019 marked the first time Saber Strike has not been held since its initial inception in 2010.

Nonetheless, 2019 has witnessed no shortage of key drills in the Baltic states; SPRING STORM, SUMMER SHEILD, BALTOPS, LOCKED SHEILDS, NOBLE JUMP 19, and CYBER COALITION all have either occurred or are scheduled to occur later this year. Moreover, NATO continues to prepare for DEFENDER 2020, the largest USAREUR-led wargame in more than two decades. The active phase of DEFENDER 2020 will take place from April until the end of May and will test the rapid deployment of NATO troops to Marijampolė in Lithuania, just north of the strategically critical Suwalki Corridor.

Still, Saber Strike, like its fellow NATO exercises, has proven key to improving and maintaining interoperability between a diverse array of allied forces. Without strong interoperability, seams can emerge between allies who each may possess their own different languages, histories, training, equipment, logistics, and intelligence

Take for example NATO’s enhanced Forward Presence (eFP) established at the 2016 Warsaw summit following Russia’s annexation of Crimea. eFP is composed of four multinational battlegroups each led by a different key member. Canada oversees troops from Albania, Czech Republic, Italy, Montenegro, Poland, Slovakia, Slovenia, and Spain. The United Kingdom leads Denmark, Belgium, and Iceland. Germany is responsible for troops from Belgium, the Czech Republic, Iceland, the Netherlands, and Norway. And the United States leads Croatia, Romania, and the United Kingdom in Poland. These multinational battalions must not only work together, but work in tandem with personnel and support from host nations Estonia, Latvia, Lithuania, and Poland and also coordinate within themselves in circumstances where soldiers come from different regiments or divisions.

Lacking interoperability, mission execution may be slowed, critical information miscommunicated, and the actions of one unit could negatively affect the outcome of another’s. Ultimately, these vulnerabilities serve to impair the ability of allies to coordinate a unified response, repel an enemy, and operationalise the goals of a mission. Exercises like Saber Strike assist in identifying these areas so that they can be sufficiently remedied before materialising in theatre.

In the meantime, as we patiently wait for the latest news regarding the next round of Saber Strike (or indeed it’s spiritual successor), I’ve put together a table summarising  Saber Strike’s  exercises over the years using USAREUR press releases and Estonian news reports (although there were conflicting reports as to how many countries – either 19 or 20 – were considered officially present in 2018). Countries with a four-pointed star (✧) indicate NATO membership. 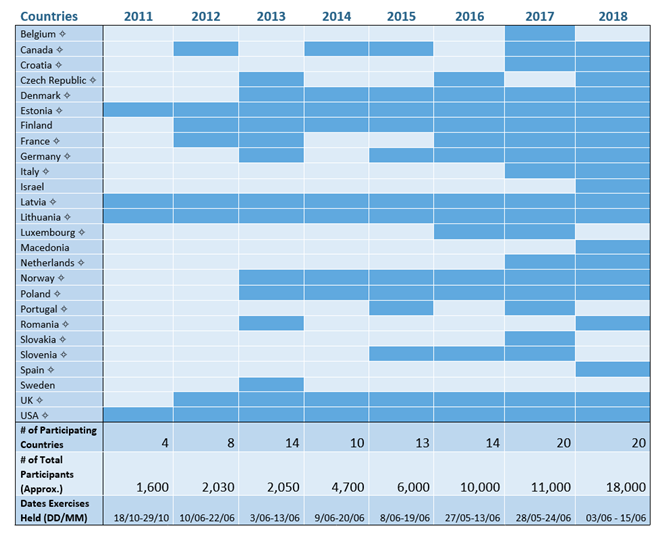 * A detailed history of the seams metaphor as it relates to both NATO collective defence and cybersecurity can be found in Chaudhary, Jordan, Salomone, and Baxter (2018).

** Correction: A previous version had French troops listed as being led by the UK and Germany and was missing Belgian troops. This has since been fixed.