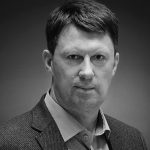 Following recent events in Georgia, the West is once again faced with a conflict between interests and values in its relationship with Russia. The question is how flexible are Western values this time around so as to make it possible to continue business as usual with Russia.