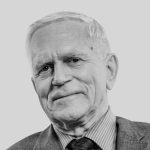 We must be prepared for conflicts over water in the near future.