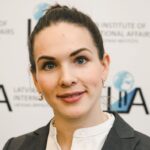 NATO’s search for a common, cohesive strategy towards China is among the challenges most likely to reveal deep fractures between the positions of the Allies.

In the second of our series of policy briefs intended to shed light on some of the issues related to the Alliance’s further adaptation, Una Aleksandra Bērziņa-Čerenkova of the Latvian Institute of International Affairs examines the Allies’ public statements on China to find the common ground that might form the backbone of a NATO Strategy for China, and the differences between them that still need to be addressed.

Download and read: Towards a NATO China Strategy (PDF)