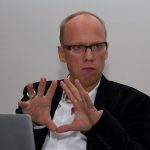 From the perspective of a small state, the EU is much less a competitive arena than an instrument for amplifying its power.