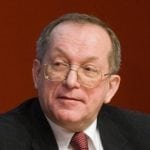 According to the Stockholm International Peace Research Institute (SIPRI), in 2017 Russia reduced it armaments expenditure by 20 per cent to 66.3 billion US dollars.

Yet the devil is in the details.

In Russia, the expenditure on what is designated national defence, and the general military expenditure is calculated differently. The National defence section does not include what the Ministry of Defence spends on housing and utilities, healthcare, education, mass media, physical education and social welfare. On the other hand, the military expenditure includes the costs of other militarised organisations, primarily the National Guard and the Federal Security Service’s border guard units.

Furthermore, the state’s financing of the military-industrial complex on top of the actual national defence procurements—subsidies in the form of capital inpayments and a number of national and federal special-purpose programmes financed via the National economy section must be taken into account.

For instance, the National defence section in the 2016 budget stipulated 3.8 trillion roubles. However, according to the calculations made by the military economy laboratory of the Gaidar Institute, the total military expenditure for that year amounted to 4.9 trillion roubles, i.e. over one trillion roubles (16 billion US dollars) higher.

Analysts from the PricewaterhouseCoopers (PwC) consulting company looked over the data for 2016 and noted that in 2017 Russia spent almost 70 billion US dollars on defence, which is over 5 per cent of the country’s GDP.

Many Russian experts are pointing out that the recent growth in defence expenditure has been concealed by using secret expenditure sections in the state budget and their proportion is increasing annually.

At the annual press conference on 14 December 2017, Vladimir Putin remarked that in 2018 the defence expenditure should be 2.8 trillion roubles. The current exchange rate puts it at approximately 47.7 billion US dollars. However, Russia’s 2018 state budget will again have secret sections, this time totalling to almost 3 trillion roubles (17.6 per cent of the total Russian budget for 2018).

Igor Sutyagin from the Royal United Services Institute for Defence and Security Studies in London asserts that financing of the Russian Ministry of Defence is performed largely via other government bodies and the actual expenditure can be between 30 and 50 per cent higher than that indicated in the budget.

In late 2017 the Ministry of Defence announced the adoption of the 2018–2027 State Armament Programme. The military intends to spend up to 19 trillion roubles on new weapons and the accompanying infrastructure over the next nine years. As stated by officials, this is one trillion less than envisioned in the current programme for 2011–2020.

In fact, the new programme will be two years shorter. Hence we should look not at the sum total of the expenditure, but at the annual average value. We can thus establish that the new programme is in fact 10 per cent more expensive that the planned figures of the current programme. And when we examine the actual average financing per finished year, it comes out even 40 per cent higher.

Therefore, to obtain precise information about Russia’s military budget, a researcher must be good at both economic analysis and cryptanalysis.