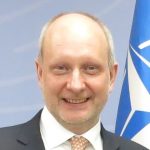 After Europe—the title of the new book by the well-known Bulgarian think tank member Ivan Krastev may sound frightening (or ominous).

The review was first published on the blog Gondori Kroonika––republished here with the author’s permission.