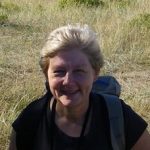 The refugee problem might be the most complicated question in post-war Sweden.