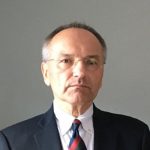 Andrew A. Michta argues that the governments of Central and Eastern European countries will need to weigh the benefit to them of continued economic engagement with China, especially in the area of 5G.

The US sees China as an economic and security problem, as its principal strategic competitor. Michta explains that the 17+1 project is seen as part and parcel of the larger strategy pursued by the Chinese Communist Party to penetrate Europe, reduce American influence on the continent and, most importantly, penetrate digital networks vital to the military and economic future of the NATO alliance. This means that the 17+1 initiative undermines Central and Eastern European countries’ relationship with the US, reduces allied solidarity in Europe and thus is weakening NATO.

Download and read: China in Europe and Transatlantic Security (PDF)

Filed under: PublicationsTagged with: China, NATO, United States of America