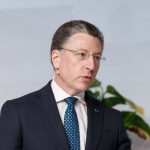 The West should pull itself together in order to compete with China and Russia.

Authoritarian regimes and top-down economies will act quickly to strengthen their global economic, political and security positions in the post-pandemic world. Democracies risk being insular, slow to recover, and slower still to think globally again. In the post-pandemic world, free societies need their own vision and strategy for the future and must band together quickly and decisively to advance a global order that preserves freedom.

Let us start from a troubling premise. In the next year or two, we will not conquer the coronavirus—we will learn to live with it. The first step will be establishing protocols to make the resumption of life and economic activity as safe as possible. Next will be development of treatments and vaccines. In a few years, we may begin to see what we used to think of as “normal” begin to return. In the meantime, however, just as with the Spanish flu of 1918–20, the virus will kill those it kills, and build antibodies in those it does not, long before we have a medical means of preventing spread of the disease.

The consequence of this is that we will need strategies for building a new global order while the coronavirus is still with us. We cannot wait until the disease is gone.

The magnitude of the changes to the global political, economic and security environment should not be underestimated. While we are still learning to live with the coronavirus, the global economy will have already experienced a shock not seen since World War II. It is not a question of making minor adjustments to return to the world we knew. It will require devising new ideas and strategies to prosper in a world that will never be the same.

Authoritarian regimes enter this challenging new world with a few distinct advantages. They have greater means and established practice in controlling their societies. They can prioritise resources for government functions and action, whether at home or abroad. They care about not the individual, but the state system itself. They have top-down control of state-owned enterprises and national resources. Many of Russia’s state enterprises may be inefficient and lacking in competitiveness in normal times, but now they will benefit from size, government backing and the ability to act strategically and bend the rules in ways that their market-driven competitors cannot. China’s industries have been successful in normal times, and may be even more so now.

Already, some authoritarian regimes have used the coronavirus as a cover for expanding their control within society—from monitoring populations to restricting freedom of speech and freedom of assembly. Just as concerning, free societies that are normally averse to such controls have also adopted similar measures in order to prevent the spread of the virus. The result: people in both authoritarian and free states have accepted greater restrictions on freedom in the name of public health. We are becoming inured to a heavy hand from the state.

A further risk is the politics of distraction—something at which authoritarian regimes are also poised to excel. They already use disinformation campaigns and aggressive external policies to distort public understanding, undermine competitors and justify domestic repression in the name of preserving the nation. Democracies do not play this game well, if at all.

Authoritarian states have their vulnerabilities as well. Their societies may have been more gravely affected by the coronavirus than publicly acknowledged. Their instinctive repression of the free flow of information impedes effective policy responses. Natural resource industries—such as oil, gas and minerals—may be slower to recover than other sectors, given low demand. Many state-driven enterprises tend to be large, inefficient and laden with unnecessary cost centres. All this being said, however, we already see signs that China is seeking to position itself for advantage in the post-pandemic world, and Russia will seek to do so as well.

Faced with these looming pressures coming out of the pandemic, the West needs a clear vision for building a world in which freedom is protected, economies, trade and wealth can again grow, and the influence and assertion of power by authoritarian systems is blunted and ultimately reversed. To accomplish this, free societies must band together and offer an inclusive vision of a free world, rather than one that simply raises national barriers.

Unfortunately, no matter where one looks in the West, one does not see that kind of leadership today. As a long-term trend, we see mainstream political forces losing public credibility, while more extreme nationalist and populist movements have harnessed public disenchantment. In some countries, this trend has been reversed temporarily—partly out of public hope that governments will step up in battling the virus, and partly out of concern that these populist movements are not up to the task of governing the country through a crisis. But this trend has yet to be tested in an election.

At the same time, one response of established governments has been to adopt some of the nationalist policies advocated by populist politicians, such as controlling immigration and borders more tightly. The motives are different—fighting the spread of the virus rather than preventing the spread of immigrants—but the effect is the same. In this sense, populist and nationalist movements may indeed be exerting tremendous influence on national policies, even when not in power.

What is needed, however, is to rekindle a sense of free societies seeing each other as allies in a common struggle rather than as disparate nations seeking only to protect themselves. The strategy of authoritarians will be to discredit and divide free societies. We need to pull ourselves together.

Echoes of the Past

This is not the first time the West has faced a brave new world and needed to put together a vision and strategy for the future.

Such was the case in the late 1940s and early 1950s. That’s when, out of the ashes of World War II, Western leaders made several key judgements and based their policies upon them. First, they concluded that the future of the victorious democratic community in the world depended on the growth of democracy, independence, prosperity and security in the world as a whole. They had an outward-looking vision.

They therefore believed it was essential to establish institutions that would protect and advance the cause of freedom, security and justice in the world. Out of that came the United Nations, the Universal Declaration on Human Rights, the Bretton Woods institutions, the European Coal and Steel Community (which later became the EU), the International Court of Justice, NATO and more. It wasn’t perfect, but it certainly represented a clear vision and strategy for the long term, and it brought tremendous results.

Another such occasion was in the 1980s, when Ronald Reagan, working closely with leaders like Margaret Thatcher and Helmut Kohl—but against popular currents at the time—decided to push back on communism globally, outspend on defence and security, support human rights activists in Central and Eastern Europe, and call for the leader of the Soviet Union to “tear down that wall”. These policies, too, were imperfect. But it was a foreign policy with a vision, based on freedom and democratic values, tied to a long-term strategy, and it paid off.

A third time was after the fall of the Berlin Wall in 1989 and the collapse of the Soviet Union in 1991. Again, Western leaders embraced a greater vision—understanding that freedom, prosperity and security in the West depended upon all of Europe being “whole, free, and at peace”. Instead of building a higher wall around the West, its leaders reached out to people in Central and Eastern Europe.

Today, publics in Western democracies are moving in the opposite direction. They seek protection—from disease, from migration, from economic competition. They reaffirm national identity over the investment in international systems that benefit all who share democratic values. Politicians in these democratic systems, needing to win elections, are following these public attitudes rather than leading them to higher ground.

An Agenda for the Future

If there is a single fault with Western policy today, it is our defaulting into a reactive, inward-looking, minimising approach to the world—one that seeks to protect our narrow selves against the buffeting currents of changing times—rather than stepping forward with a vision for advancing freedom, prosperity and security, and a strategy for getting there. As we enter a post-pandemic world, this is what needs to change.

Such an ambitious Western agenda should at a minimum be based on the following principles:

To advance these principles, several practical steps need to be taken. A few suggestions would include:

Ultimately, advancing any of these practical suggestions will require national leaders to adopt such goals and build such an international approach. This may seem unlikely, if not impossible, given the current state of national leadership today. But perhaps the coronavirus is just the kind of shock such leaders need to aspire to a higher set of goals in a post-pandemic world.