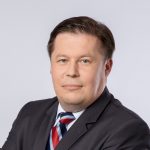 The number of NATO member states has increased from 16 to 29 in 20 years.

On 12 March 1999, the foreign ministers of the Czech Republic, Hungary and Poland deposited instruments of accession to the North Atlantic Treaty in a ceremony in Independence, Missouri, in the US. This marked the formal entry of three countries from the former socialistic bloc into the Alliance. As the then Secretary General of NATO, Javier Solana, rightly and prophetically pointed out: “History will see the accession of the Czech Republic, Hungary and Poland as a key step towards a Europe of cooperation and integration, towards a Europe without dividing lines”.1 But the moment these three countries joined NATO was about much more than cooperation and integration into the Euro-Atlantic area. It offered them the security guarantees of the biggest and most successful political and military alliance in the world—guarantees we had never had before, and guarantees that both the authorities and public opinion expected.2

Poland’s transatlantic dream started seven years earlier, on 12 March 1992, when Manfred Wörner, Secretary General from 1988 to 1994, said in Warsaw that “the doors to NATO are open”. The political process began, with two crucially important elements: the gradual acceptance by the West of Central and Eastern European countries’ aspirations, and the successful withdrawal of Soviet troops from Poland.3 At its summit in Madrid in July 1997, NATO finally made the critical decision to invite the Czech Republic, Hungary and Poland to begin accession talks.4 The key in this process was support from the US Senate, which on 25 July 1996 approved legislation stating that “the admission to NATO of emerging democracies in Central and Eastern Europe which are found to be in a position to further the principles of the North Atlantic Treaty would contribute to the security of the region”. A year later, by the agreement of the Senate Majority and Minority Leaders, the 28-member Senate NATO Observer Group was established to permit close interaction between the executive branch and the Senate during negotiations on NATO enlargement.5

The accession of the Czech Republic, Hungary and Poland did not happen without concessions. In parallel with the preparations for enlargement, the NATO-Russia Founding Act was established. This document was largely a response to Russia’s fierce opposition to NATO enlargement, which created apprehension among European member states concerned about provoking Russia. According to former Russian prime minister Yevgeniy Primakov, “instead of walking away from NATO in opposition to enlargement, we [Primakov and Yeltsin] eventually accepted the Founding Act in 1997 as it was the best deal we could get”.6 In this agreement, NATO reiterated that

in the current and foreseeable security environment, the Alliance will carry out its collective defence and other missions by ensuring the necessary interoperability, integration, and capability for reinforcement rather than by additional permanent stationing of substantial combat forces.7

NATO has changed substantially over the last 20 years. Thirteen countries from Central, Eastern and Southern Europe have joined the Alliance, expanding the organisation from 16 member states to 29. It concentrated on developing—especially with the inclusion of the three Baltic states—its political stance, further enlarging the transatlantic area on the territory of the former Soviet Union’s sphere of influence. It had, however, fewer military implications (see tables and comments).

Big changes appeared in the Alliance’s operational activities. Less than 24 hours after the terrorist attacks on 11 September 2001, the NATO powers invoked, for the first time, Article 5 of the Alliance’s 1949 founding charter, stipulating that an attack on any member of the organisation constituted an attack on all members. Expressions of support from Europe and Canada were genuine and tangible. NATO members offered Washington political, economic and military assistance. There was a further manifestation of transatlantic solidarity in November 2002 at a historic Alliance summit in Prague, when seven CEE states, including Estonia, were invited to join. As US president George W. Bush said at the time: “We believe today’s decision reaffirms our commitment to freedom and our commitment to a Europe which is whole and free and at peace”.8

There would be more consequences for the Alliance. As Stoicescu and Jӓrvenpaa wrote in 2019:

Russia’s aggression against Georgia in August 2008 did not ring alarm bells in most NATO capitals, but the illegal occupation and annexation of Crimea and the incitement and support of “separatism” in Ukraine’s Donbas region entirely changed the situation.9

During the 2014 NATO summit in Wales, the Alliance adopted a Readiness Action Plan, which embraced assurance and adaptation measures. This allowed the NATO Response Force to be enhanced, the Very High Readiness Joint Task Force to be established and the readiness and capabilities of the Headquarters Multinational Corps Northeast to be raised. The Alliance came back strongly with a collective defence, stipulating in the communiqué that “the greatest responsibility of the Alliance is to protect and defend our territories and our populations against attack, as set out in Article 5 of the Washington Treaty”.10 Simultaneously, the US provided four airborne infantry companies in the Baltic states and Poland. This triggered even more important decisions at the NATO Summit in Warsaw in July 2016, where on one hand the Alliance confirmed that Russia had breached the values, principles and commitments which underpinned the NATO-Russia relationship, as outlined in e.g. the NATO-Russia Founding Act, and on the other hand decided to establish a battalion-size enhanced forward presence in the Baltic states and in Poland.11

These developments radically changed Poland’s position in the Alliance. Our membership went from political (with almost no NATO facilities on the ground) to political-military (with a sizeable presence of Alliance facilities and troops).

As we all know, “it’s difficult to make predictions, especially about the future”; this also applies to tomorrow’s security environment in the transatlantic area. The last few years have seen the same risks—an aggressive and intransigent Russia—evolving and growing to encompass more dimensions of our security, from military threats to hybrid, cyber and information warfare. Coupled with this is the new range of non-military threats we see on NATO’s southern flank, where instability fuels radicalisation, terrorism and unprecedented pressure from migration towards southern Europe and beyond.

In this new threat environment where nothing is static, we must constantly think about new ways to respond. One cannot stand still while the world around us is on the move. Nor can we afford to assume that our potential adversaries will wait for us to do our homework. Making Article 5 of the Washington Treaty and collective defence a cornerstone of NATO should be our main duty. In that context, we should pursue the following: (1) further enhance NATO’s deterrence and defence posture, including expansion of the US military presence in the Baltic Sea region; (2) develop European defence capabilities as complementary activities to the Alliance; (3) optimise NATO burden-sharing by allocating 2% of member states’ GDP to defence, as the current threat environment requires; and (4) maintain NATO’s “open door” policy.

Last year in Brussels, NATO leaders reaffirmed the unified position on relations with Russia. All practical civilian and military cooperation between NATO and Russia was suspended. However, the Alliance remains open to a periodic, focused and meaningful dialogue with a Russia willing to engage on the basis of reciprocity in the NATO-Russia Council, with a view to avoiding misunderstanding, miscalculation and unintended escalation, and to increase transparency and predictability. We can reverse what former US Secretary of State Madeleine Albright said during testimony before the US Senate’s Foreign Relations Committee on in 1997:

“we must consider the dangers of Europe’s future. …Within this category lie questions about the future of Russia. We have an interest in seeing Russian democracy endure. … we have many reasons to be optimistic [but] one should not dismiss the possibility that Russia could return to the patterns of its past.12

We know that Russia has returned to the patterns of its past, but we cannot rule out that, in the longer term, Russia will demonstrate compliance with international law and its international obligations and responsibilities.

This year NATO will celebrate its 70th birthday. These seven decades have shown that what defines us is not our disagreements, which are natural, but what comes out of those disagreements. NATO remains the strongest alliance in history, with a proven record of bringing peace and stability in Europe and beyond. We should work together to continue this legacy.

The military personnel of 13 recent NATO member states account for less than 17% of the Alliance’s total, with Poland the only country with more than 100,000 troops. 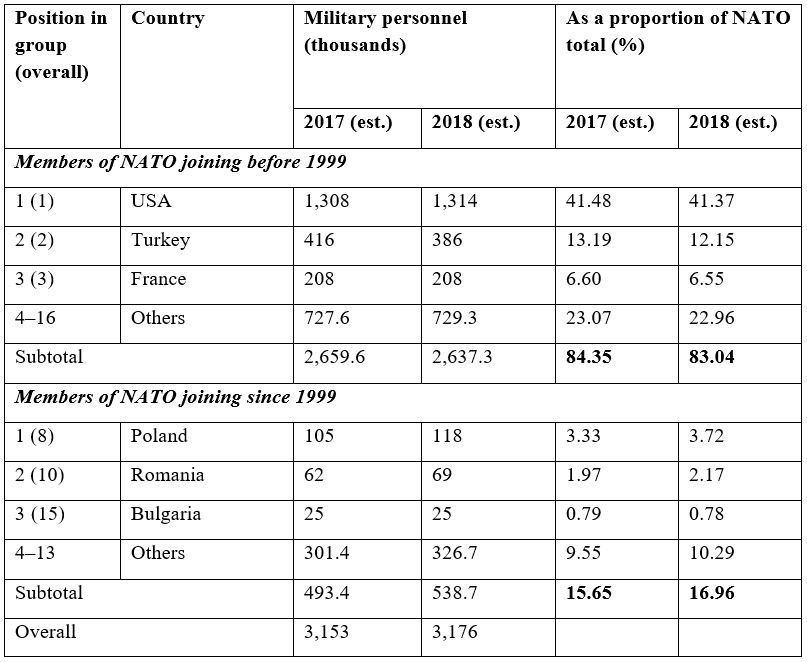 Most of the newest members are rapidly increasing the level of defence expenditure (e.g. the Baltic states and Poland). However, in absolute terms these numbers are even less significant than the figures for military personnel. 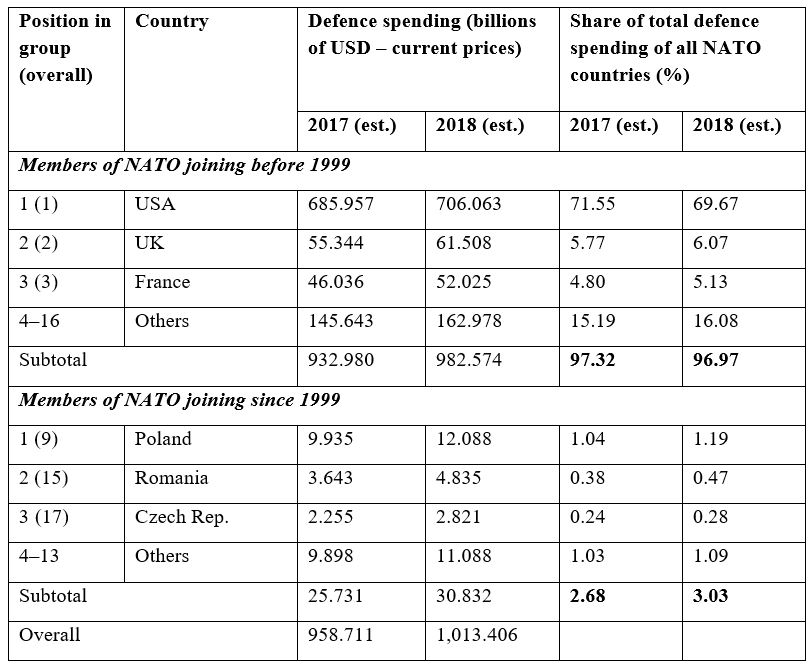 2 Poland’s accession to NATO was supported by the Polish Sejm (parliament) with 409 members in favour and only 7 against. It was broadly supported by public opinion; according to the last polls before the decision, some 67% of Poles expressed support for Poland joining the Alliance. See Polska w NATO. Stopień poparcia i przewidywane skutki. Ośrodek Badania Opinii Publicznej. tnsglobal.pl/archiv_files/038-99.pdf (accessed on 26 January 2019).

7 “Founding Act on Mutual Relations, Cooperation and Security between NATO and the Russian Federation signed in Paris, France”, 27 May 1997, Section IV.

10 “Wales Summit Declaration, issued by the Heads of State and Government participating in the meeting of the North Atlantic Council in Wales”, 5 September 2014. www.nato.int/cps/en/natohq/official_texts_112964.h… (accessed on 15 February 2019).

11 “Warsaw Summit Communique, issued by the Heads of State and Government participating in the meeting of the North Atlantic Council in Warsaw, 8–9 July 2016”. www.nato.int/cps/en/natohq/official_texts_133169.h… (accessed on 15 February 2019).

Filed under: Paper issueTagged with: NATO