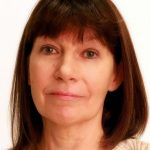 God has returned to the Middle East, believes Paul Danahar.