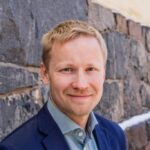 Publishing Nikolai Reek’s (1890–1942) works on military science in the series on the history of Estonian thought is a worthwhile project since it is the first time that a professional member of the armed forces writing about military subjects has been placed on the same level as other Estonian thinkers. This book will therefore hopefully help more people to understand that being a serviceman is about more than just shooting and digging ditches—which are still necessary—and that the position is also a serious science, depending on one’s rank and specific duties.