From 20 to 24 November, the ICDS– together with its partners from NATO, the Embassy of the United States of America, the Embassy of the Federal Republic of Germany, and Friedrich Ebert Stiftung (FES)– held its 7th annual International Autumn School “Resilience League 2022,” an intensive week-long workshop, in Tallinn, Estonia.

With a clear focus on disinformation and conspiracy theories, this year’s event invited distinguished guest speakers who presented their most recent research and findings in the fields to a receptive audience of young professionals with diverse backgrounds in academia, media, public sector, and civil society from over a dozen of countries: Austria, Belgium, the Czech Republic, Estonia, Germany, France, Israel, Italy, Latvia, Lithuania, the Netherlands, Slovakia, Spain, Sweden, the UK, and Ukraine.

The School opened with remarks from Peter Ptassek, director for public diplomacy from the Federal Foreign Office, and U.S. Embassy’s Charge d’Affaires Gabrielle Cowan – our honourable guests and dear friends, who once again highlighted how important it was for the community of like-minded, democratic nations to maintain unity in the face of hybrid attacks and work in concert to fight common challenges.

The School’s busy curriculum started with a frank and animated discussion that featured Konstantin von Eggert, commentator for Deutsche Welle, Oleksandr Holubov, data analyst at Deutsche Welle, Dalia Bankauskaitė, non-resident senior fellow at CEPA. The esteemed panellists challenged the audience to think about “Restoring strategic trust and security in Europe – a challenge for the next decades?”

In order to find a viable solution to this complex problem, first of all, one needs to be armed with the most accurate and reliable information. Thus, to accomplish this task, our partners from Austria – Johanna Lutz, Director of the FES Office “Democracy of the Future” and Filip Milačić, Senior Researcher for Democracy and Society at FES – presented their latest research on “Identity, Partisanship, Polarization: How democratically elected politicians get away with autocratising their country.” Dr Chico Camargo, assistant professor in computer science at the University of Exeter (United Kingdom), explained the complexities of “Public Opinion Dynamics and Social Data Science.”

Zeroing in on the psychological aspects of national defence and resilience, Dr Richard Bentall, professor of clinical psychology from the University of Sheffield (United Kingdom), spoke about “Resilience and Identity”. Carolin-Theresa Ziemer from Friedrich Schiller University Jena (Germany), who studies the psychology of communication and media use, contributed her academic research in “Psychological Underpinnings of Disinformation and Conspiracy Theories – Building Cognitive Resilience in Citizens”. Dr Magnus Hjort, deputy director general at Psychological Defence Agency, presented “Psychological Defence – The Swedish Case” and his country’s remarkable achievements in this area.

Further on the agenda were the conspiracy theories, the cancerous disease spreading on social media. To cure and build immunity against it. Dr Jing Zeng, assistant professor of critical data studies and digital methods at Utrecht University (the Netherlands), strived “To Understand and Counteract Conspiracy Theories on Digital Platforms,” while Clare Birchall, Professor of Contemporary Culture from King’s College London (United Kingdom) cautioned that “Everything is (not) Connected: Covid-19 Conspiracy Theories and Beyond.” Elżbieta Drążkiewicz, a lecturer at the Institute for Sociology from the Slovak Academy of Sciences, elaborated on “The Art of Mimesis and Mimicry within Movements Propagating Conspiracy Theories.” Proving that, from Sweden in the North down to Austria in the South, Europe faces similar challenges, Constanze Jeitler, a Ph.D. Researcher in populism and conspiracy theory at Eberhard Karls University of Tübingen (Germany), introduced the audience to “Conspiracy Theories and the Far Right in Austria.” 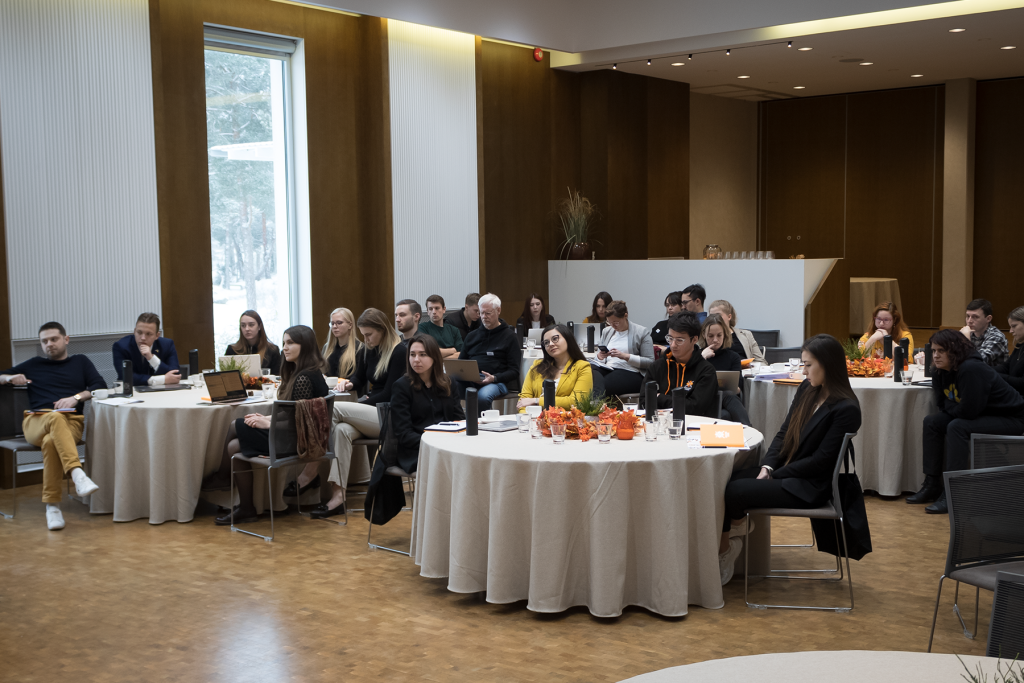 The “Resilience League” School is unique in its kind because it connects practitioners and academics to build resilient and cohesive societies, develop practical tools to combat malign disinformation and hybrid threats, and strengthen liberal democracies. With this particular goal in mind, the key item on this year’s agenda was searching for effective methods that would allow “Building a Resilient Information Ecosystem, a Behavioural Science Perspective,” as suggested by Dr Philipp Lorenz-Spreen, Researcher at the Center for Adaptive Rationality from the Max Planck Institute for Human Development. Whereas Dr Markus Pausch, Head of Research Group Social Innovation at Salzburg University of Applied Sciences (Austria), contributed with his presentation on “Polarisation as a Threat to Our Future? Ways to Strengthen Resilience in European Democracies.”

Leading the audience from the academic ivory towers of Europe to the war tranches of Ukraine, Iryna Sampan, a reporter from Kyiv, shared her experiences of holding the information front and spoke on behalf of courageous journalists who put their life at risk to tell the truth and prevent the enemy from twisting the reality.

Testing a new format of networking and professional exchange, this year’s School introduced a peer-to-peer learning session, where our most active students represented their teams and institutions and volunteered their knowledge, experience, and expertise on digital and information security, Russian narratives in Europe and Africa, the EU’s counterefforts, as well as crisis and emergency management insights contributing to resilience.

Armed with new transferable skills and useful contacts, the “Resilience League” graduate class of 2022 left the School inspired to work even harder and strengthen democratic societies against disinformation and hybrid aggression.